A retinal detachment is like the wallpaper peeling off the walls inside the eye. The retina is held in position partially by a suction force. If a hole develops in the retina, then the suction force is lost and the fluid that normally fills the inside of the eye passes through the hole and enters the space underneath the retina. As more fluid passes under the retina, the retina gradually detaches from the inner wall of the eye. When the retina is detached the cells do not receive enough oxygen and glucose and it is not able to function properly. If the retina remains detached, it will slowly deteriorate and lose function permanently. If the retina can be reattached with surgery quickly enough, it is possible to recover some function. 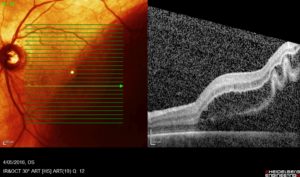 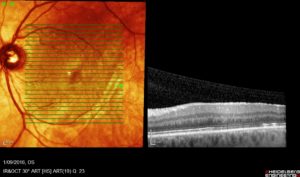 What is the retina?

The retina is a thin film of tissue that lines the inside of the eye like wallpaper and functions like the film in a camera. It converts light energy into electrical signals for transmission to the brain.

What are the symptoms of a Retinal Detachment?

Some patients have no symptoms at all. Others may notice flashing lights in their eyes prior to the retina detaching.

Most commonly, people will notice a sudden or dramatic increase in floaters, little black spots or lines within their visual field. A dark black curtain is usually noted covering part of your visual field.

Click here to read about flashing lights and floaters in your eyes.

What happens if I do nothing?

If a retinal detachment is not treated, it will usually progress until the entire retina is detached. The retina will gradually lose function, and the eye will become blind.

How is a Retinal Detachment treated?

There are 3 ways to treat a retinal detachment.

1. Scleral Buckle – in this procedure, a tiny silicone band is placed around the eye like a belt. This pushes the outer wall of the eye inwards and helps close the hole in the retina. The retina is fixed back in position with Cryotherapy, or freezing treatment. Sometimes a gas bubble is also injected into the eye.

2. Vitrectomy – this is a microsurgical “keyhole” operation using 3 tiny instruments which remove the jelly from inside the eye and any scar tissue which has developed. The retina is fixed in position using laser treatment. The eye is then filled with a bubble of a special gas, heavy liquid or silicone oil. After this procedure you will need to keep your head down, to allow the bubble to close the hole. The bubble is designed to hold the edges of the retina together so it heals, just like a plaster cast holds the edges of a broken bone together.

3. Pneumatic Retinopexy – for selected types of small detachments with holes in the upper retina, the retina can be reattached with a combination of a gas bubble and either laser or Cryotherapy. This may avoid a larger surgical procedure, however the chances of success are smaller than the success with a vitrectomy or scleral buckle.

The surgery takes approximately one to two hours, and is not painful. Your anaesthetist will give you intravenous medication to make you very relaxed and sleepy and an anaesthetic injection to prevent any pain. It is performed in a day surgery, and you do not need to stay in hospital over night. During the surgery you do not feel any pain at all.

What is the chance of success?

What is the chance of my vision improving?

The amount of vision that returns depends mostly on how much vision was lost pre-operatively and how long the retina was detached for. If the central vision was still intact prior to the surgery, it will remain intact unless scar tissue or another detachment develop post-operatively which can reduce the vision. If the central vision was lost prior to the surgery, unfortunately the vision will never be as good as it was before the retina detached. If the retina has been detached for many weeks or months, the amount of vision that returns will be less than if it were only detached for a few days. It is important to understand that any improvement occurs very slowly, as the retinal cells remodel, and the vision may continue to improve slowly for up to one year. Some patients who are still very blurred at the 3 month mark, will be satisfied by the improvement noted after 6 or even 12 months.

What happens after the surgery?

Immediately after the surgery, a patch will be placed on your eye with tape. This will be removed the morning after the surgery when you come to the office. After that, there is no need to wear a patch during the day. A protective shield is recommended for sleeping, for the first week after the surgery.

Following surgery, the vision will be very blurred due to swelling and the dilating eye drops.  Some patients who have a gas bubble will see a black, wobbly, horizontal line which will slowly become lower and lower. This is the edge of the gas bubble, and is normal and will go away completely when the bubble is reabsorbed.

What if I have a gas bubble?

Your surgeon will tell you if you have a gas bubble placed during surgery. If so, you will need to keep your face down for at least 50-55 minutes in the hour, the other 5-10 minutes may be used to perform normal duties.  You need to sleep with your head face down as much as possible.  The face down position can be maintained whilst sitting in a chair and keeping one’s head down.

It is extremely important that you do not fly in an airplane or go to high altitudes (eg Toowoomba range) until the gas bubble as gone. Doing so will risk extreme increases in intraocular pressure and potential blindness.

By two weeks after the day of surgery, you do not need to be so strict with the face down positioning. It is very important not to sleep on your back, or lie on your back looking up for any extended periods, as in this position, the gas bubble will rub on your lens, which should be avoided.

What are the risks of surgery?

All surgery has risk, and occasionally problems can arise. A cataract may develop earlier than would be expected during the normal ageing process. Occasionally, the eye may develop increased pressure (glaucoma) and medication may be required to control this. A new retinal tear or detachment may develop post-operatively and would require further surgery to correct.  Infection and haemorrhage are very rare risks which may occur with any surgery.  Very rarely, if you have a severe infection or severe bleeding you can go blind in the eye. The chance of this occurring is much less than 1 percent. If you notice pain or reduced vision following surgery, contact our consulting rooms on 3831 0101 as soon as possible. For after hours emergencies, please contact your surgeon’s mobile number or Princess Alexandra Hospital emergency department.

There is a lot of information available on the internet. It is very important however to ensure that the information comes from a reputable source. Unfortunately there are websites with false or misleading information, or websites offering unproven or potentially dangerous treatments. It is strongly recommended to visit only reputable government or university websites.

The following websites are from the world’s leading hospitals or government sponsored reputable research institutions, and the information is of high quality.