Corneal endothelial transplantation, commonly referred to as DSEK (Descemet’s Stripping Endothelial Keratoplasty) or DSAEK (Descemet’s Stripping Automated Endothelial Keratoplasty) is the preferred way of treating most people with significant corneal endothelial dysfunction. The cornea is the clear window at the very front of your eye (where you would poke yourself if you stuck your finger in your eye). The inner layer of the cornea is covered by a thin layer of cells called endothelium. The job of the endothelium is to pump water out of the cornea, which keeps it clear. The endothelial cells are like brain cells, and our bodies cannot make new ones if they wear out or are damaged and the cornea becomes cloudy and swollen (oedema) which makes your vision blurry. This is most commonly caused by a condition called Fuchs’ corneal dystrophy, which is an accelerated ageing and loss of endothelial cells. Up to 4% of the population have some minor signs of Fuchs’ dystrophy, so it is vey common. The incidence of significant Fuchs’ bad enough to require surgery is about 1 in 1000, which means there are at least a few thousand people in Brisbane who have it. Other causes of endothelial cell loss include trauma such as during difficult cataract surgery or following injuries to the eye. 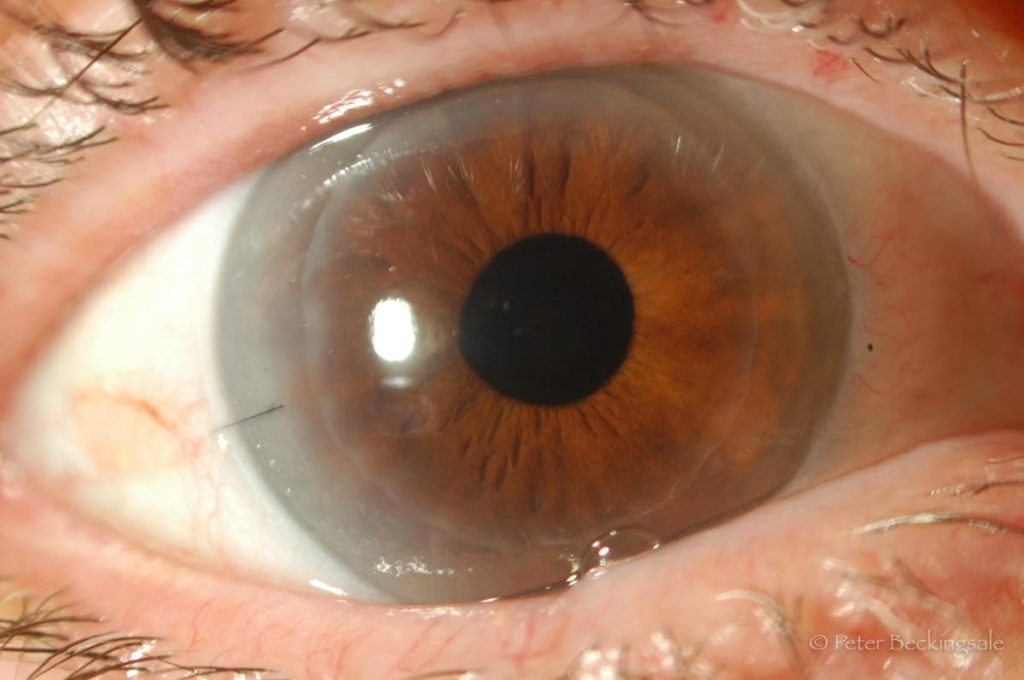 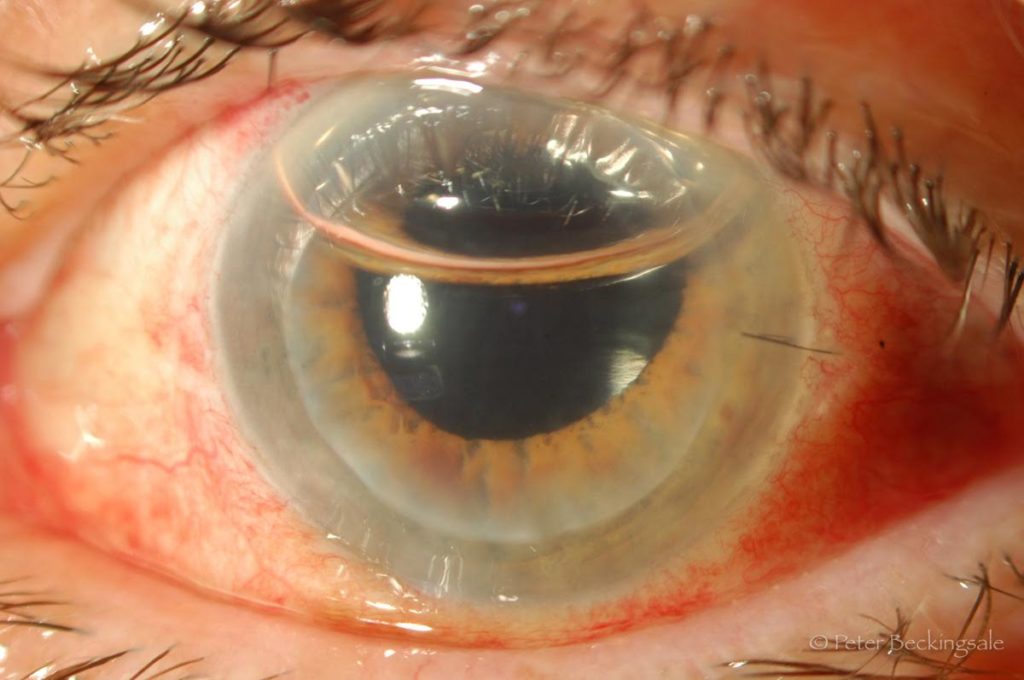 The main symptom of endothelial dysfunction is usually misting or fogging of vision. Initially many people will notice this more in the morning as the accumulated fluid in the cornea tends to dry out during the day. Night vision is often also affected early, with people noticing glare, halos or blurriness especially while driving. Vision on an eye chart will often remain quite good even as symptoms become severe.

In the early stages corneal swelling may be effectively treated by conservative measures such as strong salt water or glaucoma eye drops or exposure to dry air (such as a hair dryer on a low setting). When simple treatments are no longer helpful and vision is significantly affected, surgery is required. Until recently this was a full thickness or complete corneal transplant. This is a significant operation with prolonged recovery time, multiple sutures, unpredictable refractive outcome and significant risk of complications such as rejection of the transplant, infection and rupture of the eye following minor trauma. DSEK was designed to minimise these complications and have a speedy recovery with excellent refractive results, and has been around since the early 1990’s. It is still a corneal transplant, which means tissue has been donated by someone who has died. This generous gift is thoroughly assessed and screened by the Queensland Eye Bank before being released for transplantation. Approximately 400 corneal transplants per year are performed in Queensland alone, so it is a relatively common operation.

The surgical technique starts with peeling a paper thin layer off the back of the donor cornea, including the all important endothelial cells. This may be done either manually (DSEK) or more recently by automated mechanical devices (DSAEK). Once the donor tissue is ready the patient comes into the operating theatre. Unlike the old style full transplant which involved a large opening in the centre of the cornea, DSEK is done through small peripheral incisions, much like modern cataract surgery. If there is co-existing cataract this is removed first and a plastic intraocular lens is placed, exactly the same as anyone else having cataract surgery. The sick layer of endothelial cells and the attached Descemet’s membrane are then removed (the DS part of DSEK). The paper thin sheet of donor cells is then very gently introduced into the eye and carefully floated to the back of the patient’s cornea using a bubble of air. The air bubble pushes the sheet against the back of the cornea which allows it to stick. Initially the sticking is just by the meniscus force, much like it is difficult to separate two panes of glass which are in contact. After a few hours the endothelial pump function starts to suck the two layers together and after a few months some scar tissue is created which creates a strong adhesion. The whole surgery is done through an incision approximately 4 mm in width, which usually requires a single suture to close. The air bubble is left in place and gradually disappears over the next 3 to 4 days.

Most cases are able to be performed as day surgery (not requiring hospital admission) and under local anaesthesia. Occasional cases may require general anaesthetic or overnight hospital admission. You should not feel any pain, though you may have some minor feelings of pressure in the eye and be aware of coloured lights during the surgery. Most local anaesthetic is supplemented by sedation administered by a specialist anaesthetist to make you more comfortable and relaxed during the surgery. Total surgery time is usually between 30 and 60 minutes depending on the difficulty of the case and any other procedures done at the same time such as cataract surgery.

Over 90% of people will have improved vision after DSEK surgery. In some cases (less than 10%) the transplant will not initially stick to your cornea which means going back to the operating theatre to place another air bubble to attach the graft. This does not usually affect the final outcome. Most people will easily pass legal driving standards after successful DSEK surgery, though not everyone will get “normal” or 20/20 vision. Some people will still need glasses for best vision afterwards, especially reading. A new glasses prescription is usually done between 2 and 3 months after surgery. International studies show that survival of endothelial cells is much the same as after full transplantation, so we would expect 20 to 30 years of good vision before possibly needing to replace the transplant (it can be repeated as often as needed, though this is very uncommon). Vision is usually reasonable after 1 month, good by 2 to 3 months and then often shows gradual further improvement for several months after that.

Complications are much less common than after full transplantation, but are certainly still possible. Between 5 and 10% of cases may need more than 1 bubble of air to fully attach the transplant, which means a return to the operating theatre and a slower recovery, but no change to the final result. Very occasionally the transplant will fail and will need to be replaced if it never clears, but this is less than 2%. Rejection of the transplant occurs in 20% of full transplants but only 7% of DSEKs. If treated early it usually recovers and in most cases will not affect final visual outcome. Infection or bleeding inside the eye is possible after any eye surgery, and may result in a poor outcome, but is generally less than a 1 in 1000 risk. Late failure of the graft is certainly possible, but as mentioned earlier most grafts are expected to last at least 20 to 30 years, and they can be replaced if necessary. The air bubble may cause an increase in pressure inside the eye. Usually this does not affect the visual result but it may cause an enlargement of the pupil (the black central part of the eye) which may be long standing. Scarring of the interface between the graft and the patient’s own cornea may cause opacity which impedes vision, though this usually clears with time. If there are significant problems it is almost always possible to proceed with a full transplant though this is rarely required.

What to expect after surgery

Once the surgery is finished you will need to lie on your back for the first hour in recovery. This is so that the air bubble can float to the front of your eye and press the new cornea against the back of your cornea so that they can stick together. After an hour you will be able to sit up for that cup of tea and sandwich. When you go home it is best to try and lie on your back as much as you can for the first evening and overnight. You are allowed to get up to go the toilet, stretch your legs and have meals. You will have a bandage over your eye and will not need any drops. Pain beyond a dull ache or scratching is unusual, and if you have severe pain on the first night you should contact Dr Beckingsale.

It is normal for your vision to be very blurry the next day as your eye will still be filled by most of the air bubble. Your vision will gradually improve and will usually be noticeably better within a week. Vision continues to improve for months and sometimes even years afterwards, but by 1 to 2 months should be quite reasonable in most cases. By 2 to 3 months most people’s vision is stable enough to get new glasses.

Initially you will be taking antibiotic and anti rejection eye drops. These are gradually reduced in number, but most people will continue using 1 drop per day of anti rejection eye drop long term. There will usually be a single suture which is removed painlessly and easily in the rooms at the 1 month visit.

DSEK surgery has revolutionised corneal transplantation for corneal endothelial dysfunction such as Fuchs’ dystrophy. It is much safer with much faster visual recovery and improved visual quality. It is still a transplant surgery however, so significant complications are possible, and lifelong treatment with eye drops and regular eye checks are usually required afterwards. For most people with significant visual symptoms from corneal endothelial dysfunction though the results are now excellent and because of this many people are having their surgery much earlier than was recommended previously. If you have any questions about any of this information, or any concerns you may have, please do not hesitate to ask Dr Beckingsale during your consultation or before your surgery.