Ultrasound is a convenient modality for visualising ocular anatomy and pathology because the eye is a superficial fluid-filled structure. Similar to other applications of ultrasound, sound waves are generated at a frequency greater than 20,000 Hz (20 kHz) and these are reflected back to the ultrasound transducer when they encounter tissue in their path. As the sound wave returns to the transducer (known as an ‘echo’), a piezo-electric crystal vibrates to produce electrical impulses, which become translated into an image. Higher frequency waves penetrate less into tissue but have better resolution, whilst lower frequency waves penetrate more deeply but have worse resolution. 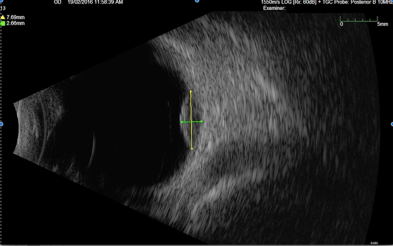 Ultrasound waves have predictive behaviour based on properties of the medium through which they travel. For example, sound waves have higher velocity when travelling through solids than liquids. Sound waves also scatter, reflect or refract when they reach an interface between tissues with different densities.

There are two main types of ultrasound commonly used in ophthalmic practice: A-Scan and B-scan. In A-scan (also known as an ‘amplitude’ scan), sound waves are generated at 8 MHz and converted into spikes that correspond with the interface between two tissues of different densities. This is a helpful tool to use when patients have a very dense cataract, and the laser interferometry machine that usually calculates the axial length of the eye is unable to generate an accurate measurement. Immersion ultrasound A-scan is then used to determine the axial length of the eye, which is required to calculate the intraocular lens for the surgery.

In B-scan (also known as a ‘brightness’ scan), sound waves are generated at 10 MHz and the data collected by the transducer produces a corresponding image. These images are helpful in visualizing and measuring intraocular tumours such as choroidal melanoma, as well as detecting retinal detachments. B-scans are particularly helpful when there is blood, inflammation or a dense cataract in the eye that precludes a direct view of the pathology, as it provides real-time information that would otherwise be unseen to your ophthalmologist.

Other benefits of ultrasound include its safety profile as it does not expose the patient to radiation, and is relatively low cost and widely available.